Trace Urban caught up with Burna Boy before his performance in Port Harcourt, during the Glo tour. Burna Boy took time to chill with his friends before the fame and money… Burna also took a stop at his family house in PH! Watch
DOWNLOAD VIDEO 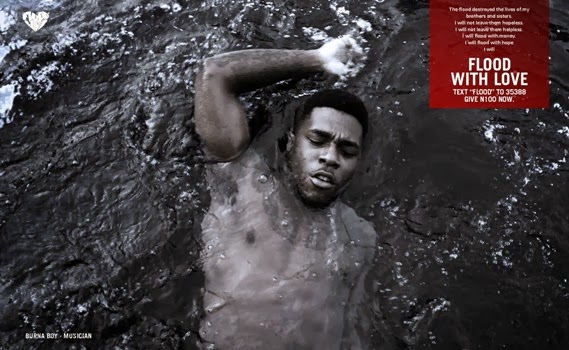 Flood a victim of the flood disaster with love today. Text Flood to 35388 and do your part to support the flood relief and rehabilitation process. God bless you as you do this. Another pic after the cut..

Hit-maker GospelOnDeBeatz made major headlines when he shone with his performance of Davido’s smash hit “All of You”; now the ace producer is unveiling the first major material lifted off his hotly anticipated yet top secret project “Musiqpedia”, which is the Patrick Ellis directed video for his hit single “Celebrate” featuring vocals from Like to Party maestro Burna Boy. The eye-popping clip brings life the drums dominated afrobeats inspired number. Hungry for some Gospel? Check out Gospel Obi and his wing-man celebrate!DOWNLOAD VIDEO TO MOBILEDOWNLOAD AUDIO TO MOBILE

NigezieTV caught up with Burna Boy in his home studio, and he dropped a freestyle on a leriq laced beat, dope stuff check on it.

He adds a number to his singles, Off his forthcoming album Aristocrat Records front man “Burna Boy” hits us with a new single, “Always Love You”, Burna Boy is always experimenting with new sounds, “Always Love You” is a little different from what we usually hear from the talented act, the spanking new Dance/Pop track has international appeal riddled all over it
As usual, The highly anticipated single was produced by Leriq, the track was rumoured to be an an unofficial version but not sure how true that is

Yes it’s jazz, the musical genre, as the aesthetic city of Calabar comes alive with the maiden edition of the Calabar Jazz Festival.

Cross River State, one of Naija’s cultural and entertainment hotspots will play host to the festival which is slated to light up the country from Friday March 29 to Sunday March 31, 2013, broadening the horizons of the state’s identity with the arts.

The best of jazz is set to be on display as lined up is a talented posse of cultured jazz entertainers which include R&B/Soul artistes, D’Angelo and Eric Benet from the USA, Jonathan Butler from South Africa, and on the home front, stars such as Darey, Asa, and Burna Boy will shine supreme.

Let’s get the love flowing, Let’s get jazzed with love!