Chris Brown isn’t some helpless jail inmate … dude can FIGHT – so says boxing champ Andre Berto who tells TMZ Sports he’s trained with singer on multiple occasions. Berto — a 2-time welterweight champ — was out in L.A. the other day when we asked if he had any advice for Brown, who’s currently behind bars in a Virginia jail. Turns out, the two are actually pretty good friends — and Andre says they’ve trained together in the boxing gym several times over the years. In fact, Andre says the singer has some pretty good hands when it comes to boxing — though he doesn’t think he’ll have to use ’em in jail … because he’s too busy making friends!Seriously, Andre says Chris is an “amazing guy” who just needs to work on getting his life in order. You buyin’ that?

Chris Brown finally threw something that didn’t get him in trouble … his cap, because he’s graduated from an exclusive anger management rehab school in Malibu … and he’s back to making music.Brown was at Universal City Walk shooting a music video over the weekend.Chris has completed his 90 days of live-in rehab, after the judge in the Rihanna beating case ordered him to attend … or else.You’ll recall … Chris entered a rehab facility on his own, shortly after getting arrested for assaulting a dude in D.C., but he was booted out after going into a rage and throwing a rock through his mom’s car window.Climb every mountain, Chris.

Chris Brown is being sued by the guy who claims the rapper berated him with the words, “I ain’t down with that gay s***” and then beat him and broke his nose. Parker Adams claims in his new, $3 million lawsuit …. he was outside the W Hotel in D.C. last October when Brown went nuts on him.  This is the same incident for which Brown is currently being prosecuted for misdemeanor assault.Brown has denied any misdeeds and we’re told he claims Adams was the aggressor, trying to strongarm his way on his tour bus.Adams is suing both Brown and Christopher Hollosy — Brown’s bodyguard.  Adams wants $1 million from each of them for his injuries, and another $500K from each for punitive damages, to teach them a lesson.

“You Look Like A Junkie…”: Wendy Williams slams Chris Brown over his Jay Z comments 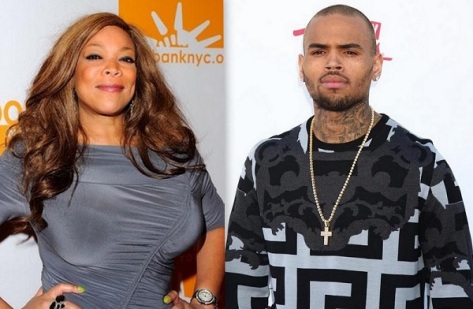 I told you last week about Chris Brown speaking in JET magazine about his relationship with the media and how he’s mistreated because of his past mistake of beating Rihanna. He went as far as throwing Jay Z in the mix and saying that the media shows love to him but ignores the fact that he stabbed a man back in the day, record executive Lance “Un” Rivera, and sold drugs to his own people too. I think we all agreed, even for those who did feel that Jay got away with those things, that Chris gets a lot of the bad press he does because of his own continuous bad behavior. Wendy Williams would agree. In fact, she seemed like she had some things she wanted to get off her chest about the singer when she spoke this morning on her show about why he needs to stop talking about Jay Z and blame himself for his messy life. Here’s what she said after reading his statement in JET:

“I remember when he stabbed Un. He was mildly famous at the particular time. A lot of you didn’t know who he was at the time, but he was big here in New York and he stabbed this guy named Un, and yeah, it did get swept under the rug. Also, the drug dealing and stuff, to my best knowledge, that was before we even knew him as a Jay or a Z, Chris. You were less than smart in trying to blame Jay Z, you need to blame yourself. You’re a woman beater, you’re disrespectful, you threw a chair out of the window of ‘Good Morning America’–whatever happened to that cute young man that used to dance for the Doublemint gum? Whatever happened to him? Now, I get it, all boys grow up, a boy grows in to a man, but you look like a junkie. That’s what I’m going to say. You’ve got those nasty tattoos, you’re way too skinny, you don’t seem to have respect for much at all.  You beat the stew out of Rihanna, and you’re with that Coochie Kran right now [crowd gasps and laughs]. I got to tell you something. Rihanna is good but the Rihanna, she’s become to me a little too edgy, if you’re trying to change around your image and you want to be treated like Jay Z is. Why don’t you go out with a nice girl named Mallory or something? Do you know what I mean? It helps Jay Z’s image that Jay Z is very cognizant of his image, but it helps a lot that he’s with a nice girl named Sasha Fierce. And please don’t Twitter war me because I don’t bark back. So please, save your Twitter rant, young man.

Well, she definitely said everything that could be said about Chris Brown’s statements and current lifestyle in just a span of minutes. I’ll let you share your thoughts now. But just know that Team Breezy is going to have something to say about this. On Twitter perhaps. Lol.

Check out Wendy’s thoughts on Chris’s comments below.

Watch The Trailer For ‘Battle Of The Year’ Starring Chris Brown, Out September 20th

Battle of the Year is an upcoming 3D film directed by Benson Lee.

The film will be released on September 20, 2013 through Screen Gems and will star Josh Holloway, Chris Brown, Laz Alonso, Caity Lotz, and Josh Peck. Battle of the Year is based upon Lee’s documentary about the b-boying competition of the same name.

The movie follows Dante (Laz Alonso) and Derrek (Josh Holloway) as they try to put together a B-boy team that will win the upcomingBattle of the Year under the belief that proper coaching can take any team to victory.

For those who don’t know, way back in January, Frank Ocean had a brawl with Chris Brown over a parking lot space.

Chris was leaving a Westlake Studio in the L.A when Frank Ocean and his crew blocked him. Sources say Frank said, “This is my studio, this is my parking spot.” A fight broke out afterwards.

Sequel to that, Chris Brown refused to stand up to applaud him when he won a Grammy.

Afterwards, Frank Ocean remixed his song ‘Versace’ and he dissed Chris Brown in it. Making reference to the scene by saying ”In the lyrics, Ocean wrote, “Versace Versace I’ll play the piano I’m not Liberace/ You could stay seated I’m taking that Grammy your music is sloppy.” The lyrics allegedly refers to Brown’s decision to stay in his seat while Ocean received a standing ovation after winning a Grammy for Urban Contemporary Album back in February.

Ocean goes on to refer to Brown’s relationship with Rihanna, writing, “You had you a lady, then she hurt your ego, now you can’t forgive her.”

Now, Frank Ocean is back to taunt his Nemesis… See the t-shirt above.

What do you think?

Call her crazy but Karrueche Tran and Chris Brown are full-on living together. Sources close to the couple tell TMZ they hooked up days before his 24th birthday earlier this month and she’s been staying at Chris’ Hollywood Hills home ever since.
Though she’s keeping her own apartment – smart – she’s already moved most of her clothes and other personal belongings to his pad.
And it’s not like they’ve been secretive – they’ve been spotted everywhere lately, hitting up the Billboard Awards afterparty and even rear-ending a Mercedes together.
Karrueche’s one persistent scorned lover — when Chris first dumped her back in October for Rihanna  — she vowed to win him back as TMZ first reported

So where does this leave Rihanna? RiRi and Breezy officially called it quits a few weeks ago … but they’ve ALWAYS had an on-again, off-again relationship … and Chris has made it no secret — he loves ’em both.

Hey Karrueche … you ever heard the expression, “Fool me once …
Rihanna really needs to move on from this guy…it’s almost like she’s convinced he’s the only guy who can make her happy! 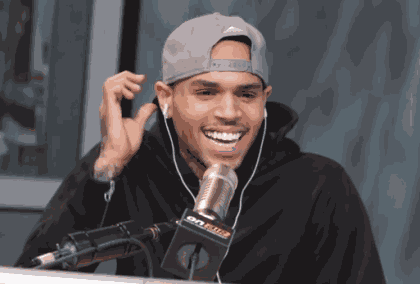 For a minute now, Chris Brown has pretty much been on a ‘nunya business’ type of vibe while turning down interviews, however, he’s beginning to turn over a new leaf.  This week, he has begun a press tour which included a visit to Ryan Seacrest as well as a sit down with Ebony Magazine in an effort to show that he’s maturing. He’s also promoting his new album, which won’t hit the streets until the summer, but word is this time around Chris is softening his edge appeal and getting vulnerable while showing off a new and more mature C. Breezy.

This week, While chatting with Ebony, Chris chatted candidly about his music as well as the changes he has made in his life over the past few months. He says that he has finally pulled back from social media, has gotten his anger in check, and he is beginning to accept his influence as a role model.

On his new album X
The title of the album is called X. So basically, it’s defining who I am as a 24-year-old male trying to grow up. But also X is also a release. X is almost like the forbidden sign, or caution, So it kind of demonstrates not always being the good guy all the time, but identifying with the people who don’t have a voice, or never had a chance, or never had that yes in their life. So with X that kind of defines who I am, being able to have that voice through my music.

It’s just been a growing process for me in general. I think everybody is expected to grow. I think me being 15 [when I came out], I wouldn’t want to have the same mentality I had back then, now. So just me going through different personal experiences and life lessons and dealing with relationships and love. You get a chance to take a journey with me and kinda see my growth as a young man, not a full-grown man, but a young man.

With me, over the three or four year processing whatever my trials and tribulations have been, I’ve been focused on the wrong thing. I’ve been focused on being sheltered or being a recluse, and not trying to be as vocal or express my feelings. But I think now I’ve been able to channel that and mature a little more and find out how to put it in my music.

And with X, I’m not looking back at the past, that’s what the past is for. I’m looking toward the future—toward everything that’s going to elevate me mentally and physically.%

Rihanna was reportedly ill and is presently recovering.Her boo posted this on twitter but deleted it afterwards.I’m happy he’s gradually coming out of his shell.I was getting bored of hearing Rihanna talk about her love without him reciprocating..

Chris Brown spazzed out on a valet worker at a bowling alley in L.A. last night cursing the guy out over a $10 “service charge”?!? Chris Brown was at a charity event for 30 minutes and when he was leaving valet tried to get the $10 “service charge” and looks like breezy wasnt feeling that! You can hear Chris Brown saying “F*ck ten dollars” plus saying about him & his team “We gonna turn this whole thing on out”! watch below!