“Not A Chance” is being described as and emotional record, while tunes like “KIRN (Keep it Real Nigga)” is a club banger.Futuresings the hook on “Flown,” (“I know you flown, and I know you down to fly, down to fly, down to fly”).BirdmanhelpsWeezysay his goodbyes on the Outro, leaving many to believe it’s his last album.
NOTE:This could be an early track listing, and some things may be changed for the final release.

(VIDEO) Lil Wayne Thanks Fans, Announces I Am Not A Human Being II Album 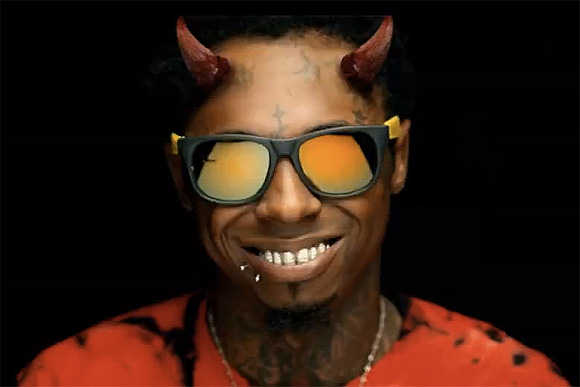 Lil Wayne: “What’s poppin’ y’all? Tunechi in this b—h. I just want to say thank you to y’all for y’all prayers and y’all concerns and all that. I swear to God I felt that love when I was laid up in that mother f–kin’ hospital bed. I want all y’all to know that I’m good. A n-gga more than good. Also, my bum a– album still coming out March 26. “I Am Not a Human Being II.” You can go get that. Also, I’m still going on tour, America’s Most Wanted Tour [with] my closest friends in the game. Speaking of my closest friends in the game, I got my n—a right here to elaborate on that subject.

Lil Wayne: [To the camera] Kiss my fist, n—a. Tunechi. But thank you for real. Thank you all out there for your prayers and all that. I’m more than good. I swear.

[GIST] : Lil Wayne Says He Is Fine After Health Scare

U.S. rapper Lil Wayne said on Friday he was fine and thanked fans for their concern after a reported seizure that led  TMZ.com to claim he was in a medically induced coma and near death.
“I’m good everybody. Thx for the prayers and love,” Wayne said in a Twitter message on his official account.
The 30-year-old rapper’s spokeswoman Sarah Cunningham said in an email that “Lil Wayne is recovering,” but did not specify what he was suffering from.
She was responding to a TMZ.com report citing unnamed sources which said Wayne was in critical condition, and near death, at Cedars-Sinai hospital in Los Angeles.
Rapper Mack Maine said in a Twitter posting earlier that Wayne was “alive and well. We watching the Syracuse (basketball) game…thanks for the prayers and concern.”
Maine said fans should not “believe the nonsense about comas and tubes to breathe.”
TMZ said the rapper was admitted to Cedars-Sinai for seizures and released on Wednesday. But the website said he was readmitted a few hours later after his bodyguard found him unconscious on the floor of his room. It said his mother was flying to Los Angeles on Friday to be at his bedside.
Wayne, whose real name is Dwayne Michael Carter Jr., has suffered several unexplained seizures in the past few months, including two in January while on a plane flight.
Wayne, a native of New Orleans, began rapping at the age of nine, when he became the youngest artist to be signed by Cash Money record label.
The “Got Money” rapper has released nine studio albums over a two decade career and has become one of the biggest names in rap music.

Update from TMZ
6:30 PM PT — Sources at the hospital tell us Wayne is still in critical condition in the ICU … but stabilizing. We’re told the prognosis is uncertain.
Wayne is sleeping right now … which is odd, because he just tweeted saying he’s OK and thanking people for the prayers and love.
5:16 PM PT — Wayne’s mother is currently on a plane flying to Los Angeles — and we’re told all major decisions about Wayne’s health (including the decision to discontinue life support) will not be made until she arrives.
Life support ke? God be with him. See more after the cut…

Lil Wayne is in ICU in critical condition after suffering yet another seizure, and we’re told it doesn’t look good … TMZ has learned.

We broke the story … the 30-year-old rapper was rushed to Cedars-Sinai Hospital in L.A. Tuesday night after suffering multiple seizures.  He was released Wednesday but just hours later one of his bodyguards found him in his room, on the floor and unconscious.

Wayne was rushed to the hospital again, but this time he did not stabilize.  He was taken to ICU, where he was placed in restraints because he was shaking uncontrollably.

We’re told Wayne is currently “unstable,” and has been placed in an induced coma.  He is breathing through tubes.

We’re told several people are at Wayne’s bedside crying, and a number of rap artists and family members are on the way.  Sources say the scene is violent as Wayne shakes uncontrollably.

Sources say there’s evidence Wayne went on a Sizzurp binge after being released Wednesday, because doctors found high amounts of codeine in his system.

We’re told Wanye’s stomach was pumped 3 times to flush the drugs from his system.

Lil Wayne’s daughter Reginae Carter and Birdman’s daughter Bria Williams team up for literary debut with “Paparazzi Princesses.”
As part of Cash Money Content, Lil Wayne’s daughter Reginae Carter and Birdman’s daughter Bria Williams will make their literary debut with Paparazzi Princesses this June. Both Bria and Reginae are 14 years old and hope to bring their perspectives so their peers can relate to their adventures and experiences.
The book is a collaboration with author Karyn Langhorne Folan and will be made for teens and young adults.
“There’s no better feeling than watching Bria and Reginae make this dream come true,” Birdman shared in a press release. “They took an idea, worked extremely hard, and brought it to life. It’s the kind of story that everybody can feel, and it’s only the start of much bigger things for these two wonderful young ladies.”
Lil Wayne also released a statement on his feelings about the book.
“I’ve got to be honest,” he said. “It’s inspiring to see what these girls have done. It wasn’t easy, and they did it all by themselves. ‘Proud’ doesn’t even begin to describe how me and the ‘Birdman’ feel. I can’t wait for everybody else to experience their story.”
Paparazzi Princesses will be out June 4, 2013.

Lil Wayne? Not Jay Z? Lol. MTV just released their list for the Hottest MCs in the game and when asked who he felt was the best rapper alive, Kanye, who was placed at No. 7 in the list, picked Lil Wayne.

Here’s the thing; Lil Wayne and Jay Z are arch enemies…and being Jay Z’s former bff, one would have expected Kanye to pick Jigga. Besides Jay Z is a better rapper than Lil Wayne, right? Stop the beef Kanye…lol

Anyway in an interview after the MTV list came out Kanye explains,

“Yeah, #7 bothers me. I think that Wayne is the number one rapper in the world.”
See the rest after the cut…

“I just think he’s like, you know, him and Jay and Em (Eminem) and certain people are just the greatest rappers of all time. For me I feel that in order for them to put me as #7, they had to bring up things that they didn’t like [about me].”
“[Like] They didn’t like the Cruel Summer album. And I’m like, “That’s a compilation. It ain’t all rappers on G.O.O.D. Music.”
“Cruel Summer got “Don’t Like (Remix),” “Mercy,” “Cold,” “New God Flow” all on one joint, you know. And “Clique,” and “Clique!” You can’t name five records like that on no album. But they wanna diss me and be like, “He did Cruel Summer and he can’t say he ain’t part of it ’cause he’s on eight records…” Like they wanna try to—ain’t nobody bringing’ up that “Diamonds” remix verse. There wasn’t no verse in a year that’s f*cking with that verse.”
“It’s definitely not based on a body of work, but possibly could just be overall rap, MC swag. Sean is a great rapper, period. It checks all the boxes. What happens is with them, with these types of judges and people who review it, when you come in, I had like the pink polo and the backpack and I’m checking all the boxes of that Tribe Called Quest era and J. Dilla and all that, so they wanna champion it. They don’t like Givenchy Kanye. They don’t like Kanye in a kilt. They don’t like Kanye in a relationship.”