The popular Lagos-based on air personality wore this lovely dress to the grand finale of Glo X-Factor which took place last Tuesday. And for those who do not know, she says she’s still a virgin. #GoodGirl!Check out more lovely photos below: 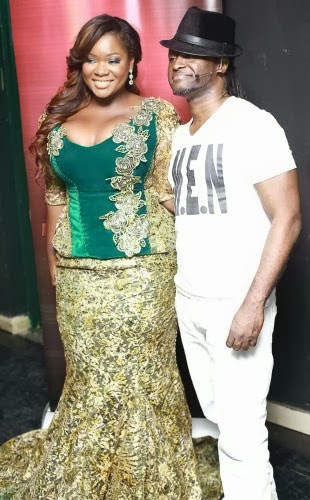 Video: Rita Dominic on The Juice with Toolz

Rita shares with Toolz her earlier dreams as an actress, relationship and her future goals

The wealthy Bowen-Cole family’s unclear history and hedonistic son Femi, the wealthy and arrogant Bako and Ademola families which appear untouchable and oppressive.

The Baloguns, once at the apex of society, now suffer a sad plight as the bread winner of the family sits semi-comatose waiting to die, leaving them bitter and vengeful over old rivalries. Sade Coker, a beautiful and ambitious girl living a self-determined life, faces her greatest challenge when it comes to choosing between love and loyalty.

Segun Alaba, smart and street savvy, taking his destiny into his own hands he vows to gain money, power and respect on the island by all means necessary. The show derives its essence from the real experiences of Nigerian high-society and its excessive culture. Expect celebrity cameos, real Lagos city venues, events and lifestyle, tentatively playing on the border between reality and fiction.

That “X Factor” is set to launch soon in Nigeria is no news. What no one knows is that M.I was picked as a judge of the reality TV show over the likes of 2face, Sammy Okposo, Dare, Obi Asika, Bantu, eLDee, and Cobhams who, reports confirm, who were also approached.
Also joining the team is Beat FM On-Air-Personality Toolz. She was picked as the Glo X Factor presenter over other hot-shots like Michelle Dede, Mo Abebe, Isio Wanogho, Matilda Obaseki, Ebuka Obi Uchendu and Femi Branch.
The other judges joining M.I is Ghanaian rapper, Reggie Rockstone and Nigerian legendary vocalist Onyeka Onwenu.Nothing is official yet but watch this space and we’ll keep you updated!!

Popular Nigerian on-air-personality Tolu ‘Toolz’ Oniru has covered the latest edition of TW Magazine.
The Beat FM 99.9 OAP opens up on her starting out, her rise to the top and why she’s just getting started…
It’s big things popping (no pun intended) for Toolz who’s in her late 20s. 2012 has been her biggest year so far, successfully launching her website which now ranks among the top 500 websites in Nigeria, working with MTV and hosting a number of landmark events…

Since her ‘bold and beautiful’ appearance at Iyanya’s Album launch, many folks on the social media, especially ladies, have been criticizing sexy On Air Personality,Toolz. They seem to take pleasure indiscussing her figure 8 shape on the negative.

See the sexy photo and her caution to those involved below….